Magazine Limba, literatura, folclor is a scientific publication that offers philologists from the Republic of Moldova, as well as from other countries (researchers, doctorands, professors) the possibility to value and promote the obtained scientific results, to put into circulation ideas, concepts, notions that would define their scientific profile by publishing their articles, reviews, literary chronicles in our regular columns: Linguistic research, Literary chronicles, The Encyclopedic dictionary of Basarabian writers, Literary portraits, Conferences of the Institute, Editorial review, in which there are presented the scientific events organized by the founder of the magazine, the Institute of Romanian Philology “Bogdan P.-Hasdeu”, the most recent scientific papers of the researchers etc. Besides the main columns, the editorial board of the magazine also plans to include occasional columns, depending on the scientic activities of the Institute at the moment.

In the context of Open science, the magazine Limba, literatura, folclor has an open access status, the texts published in the magazine being accessible to the readers for free, for download, quote, distribution, while respecting the authors copyright and the norms of ethics practiced by COPE (Best Practice Guidelines on Reserarch Integrity and Publishing Ethics) and Elsevier (Publishing Ethics). 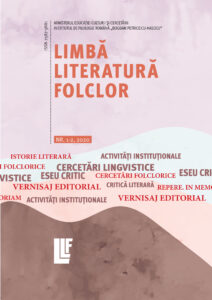 LLF IS COVERED/ INDEXED/ ABSTRACTED IN: